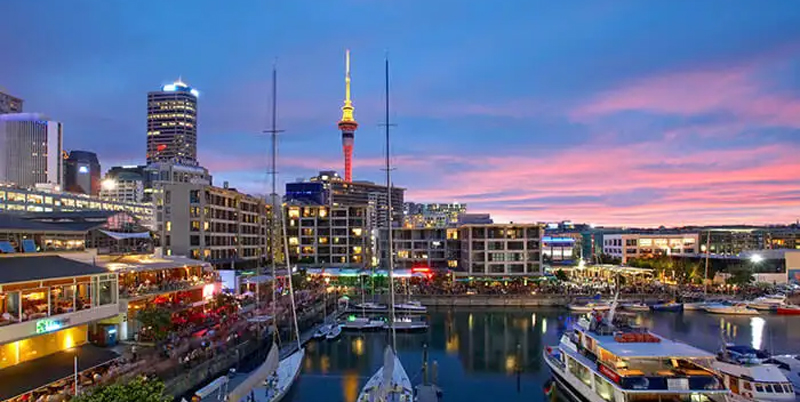 New Zealand is nestled in the South Pacific Ocean 2,162 kms (1,343 miles) from Australia, our closest neighbour and friend. There are two main islands in New Zealand, creatively named the North and South Islands. The total land area of New Zealand is 270,000 square km, which means it could fit into Australia 28 times and fit into the USA or Canada around 34 times. However, we are slightly bigger than the United Kingdom.

New Zealand is a three and a half hour flight from Eastern Australia and around a 10 hour flight from most places on the Pacific Rim, such as Singapore, Hong Kong or Tokyo. Flying time between Los Angeles and Auckland takes just under 13 hours and double that between London and Auckland. Well over three-quarters of New Zealand's population live in the North Island and a significant percentage of those live near our largest city, Auckland.

Distance is not a significant factor here. The coastline is two hours drive at the most from any part of New Zealand. It would take 10-12 hours to drive the length of each island, but if you wanted to really experience the country it would take much longer as there are so many interesting and exciting places to visit within New Zealand.

There are just over four million New Zealanders, and every single one is either an immigrant or descended from one. In fact, people from over 145 countries now call New Zealand home. It was the Maori who first arrived here over 600 years ago, followed in the 19th century by large numbers of migrants from the United Kingdom. The end of World War II saw an influx of European migrants from war-weary countries looking to rebuild shattered lives. From the 1960's, people from our neighbouring Pacific Islands, predominantly Samoa and Tonga, began settling here followed by Chinese, Korean and other nationalities in the 1980's.

More recently, we've welcomed new residents from countries as diverse as South Africa, Zimbabwe and Somalia. New Zealand is a multicultural society and that's a commonly used word to describe the infusion of cultures and ethnicities in New Zealand. But it's more than this. We embrace and celebrate the richness and diversity of people who choose to make New Zealand their new home. In spite of our geographical isolation (or, sometimes, because of it) we regularly succeed on the world stage. You'll see us represented in the fields of arts, science and technology and on the sports fields as well. Maybe it's because we don't know we're a small country or maybe it's because we have a unique way of looking at life. Whatever it is, maybe it could be the place for you.

By world standards, New Zealand is a very young country, with European settlement on a large scale only occurring over the last 150 years. While our history (from British colony to independent country) is relatively recent, we can draw on the culture of the first settlers, the Maori, who have been resident here for over 600 years.

On 6 February 1840, in Waitangi, Governor Hobson, representing the British Crown, put his signature to a document signed by 40 Maori chiefs. In essence, this document (now known as the Treaty of Waitangi) ceded sovereignty of New Zealand (Aotearoa) from Maori to the Queen of England. In return, the rights of Maori to their land, forests and fisheries would remain undisturbed and Maori would enjoy the on-going protection of the Crown. The Treaty exists today as a living document and has, in recent years, acquired increasing importance in the development of the nation's social and economic policies.

English is the main written and spoken language in New Zealand. The ability to read, speak, write and understand English to a relatively high level makes living and working in New Zealand easier and more fulfilling. Our language is very informal and relaxed and, like you, we also use unique slang words to describe everyday things.

The Maori language, also officially recognised, is experiencing a significant renaissance, with over 4 percent of the population able to speak it fluently. Specialised schools, radio stations and a television channel dedicated to the language have all helped arrest a serious decline in its use. More and more we're seeing Maori words becoming part of the general language used by all Kiwis, for example kapai ("kar pie") = good, whanau ("far know") = a family group, manakai ("ky") is food.

Being in the Southern Hemisphere, our seasons are completely opposite to countries north of the equator. Winter lasts from June until August and our summer is between December and February. Because we are surrounded by sea, our climate doesn't get uncomfortably hot or unbearably cold in the areas where the majority of us live, although extremes will be found, particularly in our mountain ranges in winter. Overall, our temperate climate ranges from 20–30°C (68–86°F) in summer, and from 5–15°C (41-59°F) in winter.

New Zealand is a modern parliamentary democracy based on the Westminster parliamentary system. New Zealand's Parliament is currently made up of 120 Members representing eight parties. New Zealanders go to the polls every three years, with the next election in 2011. John Key is the current Prime Minister and he heads the ruling National Party Government. While voting is not compulsory, as a New Zealand resident or citizen you will be required to enrol as an elector.

New Zealand is a member of the British Commonwealth (along with Australia, Canada and 51 other countries) whose membership makes up 30 percent of the world's population. New Zealand is also a member of numerous international organisations such as the OECD, UNESCO and WHO, as well as being party to a number of international agreements like the Antarctic-Environmental Protocol, Climate Change-Kyoto Protocol and Ozone Layer Protection. Queen Elizabeth II is our Head of State and her personal representative in New Zealand is the Governor General. However, neither take an active or initiating role in the 'business' of government. The Governor General is regarded as a symbol of national unity and leadership.

New Zealand has 14 national parks. In fact a third of New Zealand is protected in parks and reserves. In such a small country, you'll find incredible variety in our landscape and vegetation. With majestic mountain ranges, sweeping plains, towering forests, azure lakes, and secluded bays dotted around its lengthy coastline, a recurring theme with many tourists and migrants is New Zealand's stunningly beautiful countryside. In fact, the only natural landscapes in the world that New Zealand does not have are deserts and icecaps!

Aside from our people, the diversity and accessibility of our countryside are our greatest assets and they offer an enormous range of leisure and lifestyle options. New Zealanders embrace them all – from swimming and boating to skiing and hiking.

New Zealand is a beautiful Country situated in the southern part of the Pacific Ocean. It is made up of two main islands, and is roughly the size of Japan, California or Great Britain. Our cities, scenery and cultures are vibrant and diverse. New Zealand has a multi-cultural population of 4 million and is home to people from the Pacific Island, various parts of Asia, India, Africa, the Middle East and Europe. Indigenous Maori Make Up around 14 percent of the population.

Most major religions are represented in New Zealand and Human Rights Legislation Guarantees freedom from discrimination on the basis of religion, which is seen as a matter of personal choice. Major cities have churches, temples, mosques, synagogues and other centres of worship. Homestay families and student hostels can ensure that dietary requirements are respected.

There are various reasons for this:

New Zealand degrees have a reputation around the world for being practical, Modern and desirable. In some niche areas such as biotechnology, forensic science and marine engineering, New Zealand degrees and programmes are recognized internationally. In developing countries of Asia and the South Pacific it is not unusual to find senior executives and administrators, including cabinet ministers and even prime ministers, who have been educated in New Zealand.

In many ways it's not what NZ have that's important to quality of life – it's what they don't have! NZ doesn't have high crime rates, police don't carry guns and instances of corruption are virtually unheard of. They don't have abject poverty or hunger and don't have the pollution, congestion, health issues and cramped city living that we see elsewhere.

One of the things you will find in NZ, that it's something we take very seriously, is our acceptance of different views and ideas. They are a modern, secular, democratic society with no ingrained class system. Freedom of speech, expression and religious belief is guaranteed in law.

Compared with what you probably paid for your current home, you'll find your currency converted to New Zealand dollars will go a very long way in our real estate market. Owning our own home is something that two-thirds of us have chosen to do and is still affordable for most. While suburban houses still account for 85 percent of house sales, inner-city and semi-rural living are becoming increasingly popular options. The following is a look at some of our more common housing styles and the price range they generally fall into. The prices mentioned are indicative and vary by region.

NZ government-funded schooling system provides a comprehensive curriculum of academic, sporting and skills-based learning options, in a positive environment. Most schools, even those in inner city areas, have their own playing fields, gymnasiums and swimming pools.

New migrants generally find that New Zealand offers a better balance between cost of living and lifestyle than they had before.

Housing in New Zealand is often found to be more reasonable than in many parts of Asia, Europe and North America. New Zealand produces a wide range of competitively priced consumer goods of a similar style and quality to those found overseas. The items we do need to import such as motor vehicles, electrical and computer equipment and petroleum products are priced similarly to or, in many cases, are cheaper than in other comparable countries. While bargains can be found during frequent retail sales, overall the cost of individual items doesn't vary markedly between regions.